Bamako, The Hague, 12 July 2022 - Ten years after the destruction of the mausoleums of Timbuktu, reparations are continuing to be provided for the victims in the case of Ahmad Al Faqi Al Mahdi , who is due to be released on 18 September of this year. Following on from the symbolic and individual reparations, the Trust Fund for Victims of the International Criminal Court and its partners have launched the collective reparations programme for Timbuktu, on 6 July, in the presence of the city and regional authorities.

“Launching the collective reparations exactly ten years after the commission of this war crime is a powerful symbol. Although Mali is still facing a major crisis and the security situation in the region of Timbuktu remains highly precarious, this nevertheless demonstrates that justice is possible and that the victims’ right to justice can and must be guaranteed. The cultural and religious heritage that was targeted during these attacks is now reconstructed and stands at the heart of daily life in the community of Timbuktu, which will now be able to benefit from specific measures intended to address the harm suffered”, states Ibrahim Sorie Yillah, Vice-Chair of the Board of Directors for the Trust Fund for Victims.

Following the implementation of the symbolic reparations, which took place on 30 March 2021 in Bamako, more than 880 victims have benefited from individual reparations, in accordance with the corresponding Decision of Trial Chamber VIII of the International Criminal Court. Now that the individual reparations are almost complete and the necessary consultations have been conducted among the Timbuktu community, the collective reparations can now commence.

On 6 July 2022, the Trust Fund for Victims and its partners, CFOGRAD, UNESCO and CIDEAL, launched their reparations at a ceremony held at the Ahmed Baba Institute of Higher Learning and Islamic Research (Institut des hautes études et de recherches islamiques Ahmed Baba) of Timbuktu, in partnership with the local and regional authorities and attended by the Mali Representative of the International Criminal Court. Canada and Norway, which are contributing to the Trust Fund’s reparations programme, were both represented on this occasion.

“The collective reparations are especially important as they are long-awaited by the whole of the community following the individual reparations, which involved only a limited number of beneficiaries based on their particular connection to the destroyed mausoleums. In the context of these reparations, the commemorations will play a key role in passing on and conveying the role and significance of our heritage to future generations,” states Aboubacrine Cissé, Mayor of Timbuktu, during the launch ceremony.

Aboubacrine Cissé, Mayor of Timbuktu, Ibrahim Sorie Yillah, Vice-Chairman of the Trust Fund for Victims, and Nouhoum Sangaré, Head of the ICC Office in Mali, at the launch ceremony in Timbuktu on July 6, 2022 (©Hameye Toure)

In order to support the commemoration initiatives, CFOGRAD, a partner organisation of the Trust Fund, set up participatory commemoration committees throughout the whole city, which brought together all sections of the population to reflect on the commemoration. Once the initial proposals had been prepared by the various committees, it was then necessary to share and consolidate these with the administrative and political authorities in Timbuktu in order to jointly determine the form that the commemorations should take.

“Commemorations are not a simple matter and raise numerous questions. What is it that we want to commemorate? The destruction of our heritage? Its reconstruction? What form must they take, and how can they be integrated into our life and community in a manner that will have meaning and enable them to be passed on to future generations? These are the questions that the commemoration committees need to address in co-operation with the city and regional authorities. And it is only in this way that the commemorations will be able to provide a restorative dimension for our community, in the spirit of the decision issued by the judges of the International Criminal Court”,  states Alpha Touré, Director of CFOGRAD.

At the same time, on 5 July 2022, the Governor of the Timbuktu Region, Mr Bakoun Kanté, established a regional commission to coordinate and monitor the collective reparations measures [Decision attached as an annex], which was tasked with supporting the measures implemented by the Trust Fund for Victims. Supporting the city authorities should help to facilitate implementation of the activities associated not only with the commemorations but also with the economic assistance and the heritage restoration.

“The heritage that was destroyed in Timbuktu is of exceptional universal value. As part of its mandate, UNESCO has already contributed significantly to its reconstruction. In supporting the Trust Fund for Victims with the implementation of a historic decision in the field of international criminal justice, in favour of cultural heritage – and at a time when this is threatened in numerous regions of the world – UNESCO intends to go even further in terms of restoring the heritage that constitutes an important part of the identity of this city and its inhabitants,” states Edmond Moukala, Representative of UNESCO in Mali. 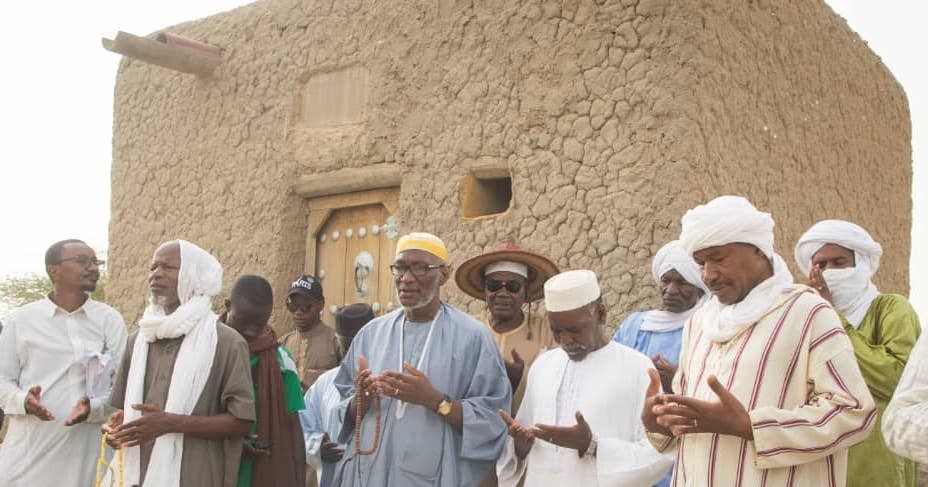 Recollection at the Three Saints Cemetery with descendants of the Saints, on the eve of the launch of collective reparations, July 5, 2022 (©Hameye Touré).

On 26 September 2016, Mr Ahmad Al Faqi Al Mahdi was found guilty by the International Criminal Court of the war crime of intentionally directing attacks against buildings of a religious and historical character and was sentenced to nine years’ of imprisonment. Since that date, he has been serving his sentence. In November 2021, the ICC granted his early release, which is due to take effect on 18 September 2022.

“In the case of Ahmad Al Faqi Al Mahdi, which is drawing to a close with the implementation of the reparations and his upcoming release, the International Criminal Court acts – as it does in all its proceedings in Mali and elsewhere – in complementarity with the State concerned. In the wake of the work carried out by the Truth, Justice and Reconciliation Commission (Commission Vérité Justice et Réconciliation), Mali has an ambitious reparations programme at the national level. The launch of the collective reparations is fully in line with this process, which is aimed at upholding the rights of the victims to receive reparations,” states Nouhoum Sangaré, Representative, Chief of Field Offices of the International Criminal Court in Côte d’Ivoire and Mali.

The content of this press release is the sole responsibility of the Trust Fund for Victims.

Annex [The full text of the Decision is available only in French.]: Decision No. 2022-0147/GRT-CAB of July 5, 2022, creating a regional commission to coordinate and monitor collective reparations measures relating to the maintenance and rehabilitation of protected buildings in Timbuktu, commemorative ceremonies, and support for the revival of the local economy within the framework of the Trust Fund for Victims.